Nothing to do with maQLu per se, but it involves me, so why not?

Originally posted on my other blog, Pyra Draculea Sound. 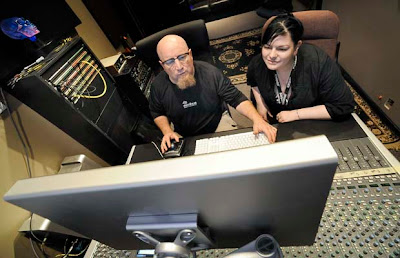 Inside Vancouver’s school of rock

By Chris Brandt, Special to The Sun

As the saying goes, if you want something done right, you’ve got to do it yourself.

It’s a maxim that has become gospel in the music industry, as the rise of digital media and the decline of the big record labels compel artists and producers to take an increasingly entrepreneurial approach to their careers.

But you can’t “do it yourself” if you don’t know how it’s done, and that knowledge isn’t always easy to come by.

Published resources become obsolete as quickly as computer software manuals. As the business evolves, mere book knowledge and classroom experience are not enough.

Fortunately, Vancouver is home to a wealth of talent that is ready to guide the way with hands-on mentorship.

“I just want to give back,” says music producer Garth Richardson, who is renowned for his work with artists such as Kiss and the Red Hot Chili Peppers. Music and mentorship run in the Richardson bloodline: Garth’s father Jack discovered the Guess Who, and the Juno award for producer of the year bears his name.

Jack Richardson mentored many of the leading Canadian recording engineers and producers, among them legendary producer Bob Ezrin, whose credits include Pink Floyd’s The Wall.

Now Ezrin has teamed up with music-publishing impresario Michael McCarty, longtime studio educator Kevin Williams and Richardson, to continue this spirit of mentorship at the Nimbus School of Recording Arts. Even the name revives the spirit of the elder Richardson’s studio, Nimbus 9, which is now owned by Burton Cummings.

Some sound recording teaching programs show up-and-coming music engineers how to track a visual representation of a sound wave on a computer screen, but not to actually understand its audible equivalent. “This is the difference between training engineyes versus enginears,” says Richardson. He recalls his frustration when he met a young engineer who spent $14,000 on a program, but could not burn a copy of a disc at the end of it.

“It is like this all over the U.S. and Canada,” says Richardson.

The program at Nimbus consists of four modules: Sound recording, music production, artist development and music business. Each course is six months long. The staff expect aspiring record producers to complete all four modules, while other students may focus simply on the business courses.

Nimbus shares space with The Farm Studios, where students receive hands-on, professional studio experience. Students can attend workshops on professional recording sessions, and can observe others’ sessions, too. Each course is limited to a maximum of six students, to allow each person more time with the equipment.

Staff encourage students to make use of any empty studio time, and remind them that they have 24-hour-a-day studio access. After all, Richardson says: “Rock and roll doesn’t shut down at 10 p.m.”

Students don’t simply learn to press buttons and turn dials, but also how to deal with people — the production module includes regular classes with a family counsellor. After all, understanding a little psychology can help a musician get the most from a recording session.

Nimbus student Pyra Draculea is halfway through the sound recording course, and describes the mantra of the school as: “Come on, go do it.”

Three of the most prominent and legendary studios in California echoed Draculea’s praise for the Nimbus approach. In an e-mail interview, Shivaun O’Brien of San Francisco’s Sound City Studios — where Nirvana’s Nevermind and Fleetwood Mac’s Rumors were both recorded — described Richardson as instilling an “old-school work ethic that until now has only been handed down from one generation of engineers to another and is sorely lacking in many of today’s music students.”

She shares Richardson’s frustrations, and says “most recording schools would rather teach their students to look at music on a computer monitor and run a computer rig instead of teaching them to mic a drum kit and more importantly, actually listen to the music they are recording.”

Jessica Castle of Ocean Way Recording Studio in L.A. — home to albums from Frank Sinatra to Radiohead — adds that “Garth Richardson is an amazing and established figure in the music industry. He has great vision and technique on what makes a phenomenal recording and how to go about getting it.”

Gary Myerberg, chief engineer at L.A.’s Eastwest Studios — where The Mamas and the Papas recorded California Dreaming and The Beach Boys recorded Pet Sounds — was also enthusiastic, saying: “I honestly would love to be able to be a fly on the wall and hear the wisdom transferred to this next generation … its a no-brainer that a Nimbus grad would be on the top of my list as a possible candidate for a position at our studio.”

Richardson predicts a demise of the major record labels in the next three to four years.

“There will be no more Sony, no more Universal — they will just be marketing companies.”

Whether or not Richardson’s prediction comes true, it’s undeniable that artists and producers must already take more responsibility for elements of their careers that were traditionally managed by large corporations. Richardson wants to show them how.

Special to The Sun
© Copyright (c) The Vancouver Sun

Originally posted on my other blog, Pyra Draculea Sound. It seems to have disappeared now, even off the internet. Oh sure, I […]

Cato the Elder always ended his speeches, no matter the topic, with the saying “Ceterum censeo Carthaginem esse delendam.” (“Moreover, I advise […]

Decided to take up astrology again, it’s been years since I used to study it a bit. As a refresher, I’m reading […]